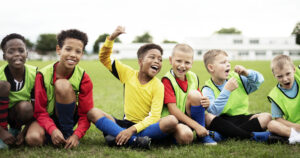 There are many great PE uniform sets. Different schools may have slightly different physical education requirements. Students will typically wear those uniforms while participating in a wide range of different activities. Many of the best custom P.E. uniforms were designed with versatility in mind.

Usually, PE uniforms include shorts. Students are going to be exercising for long periods of time, and shorts are usually less restrictive than long pants. While plenty of people do wear pants when jogging, it’s very common to wear shorter pants during other athletic activities. People can move very freely when wearing shorts, so many custom P.E. uniforms include shorts or shorter pants.

In cooler climates, people might wear sweatpants instead of shorts, of course. Having both a winter P.E. uniform and a spring P.E. uniform is common in some areas. It’s easy to warm up during any gym class, but that process can take time. Flexible and lightweight sweatpants can be as comfortable as shorts. Some people also prefer to wear pants instead of shorts in general.

P.E. shirts and P.E. shorts or pants should match, at least to a certain extent. However, most athletic clothing has a very casual appearance. Custom P.E. uniforms can look fashionable without being too formal. Almost any set of shirts will go with black shorts or pants, making things easier for the people who are trying to create the P.E. uniforms.

P.E. shirts should be made using relatively lightweight fabric. A winter P.E. uniform could include a hooded sweatshirt, and students could switch to wearing t-shirts during the spring. It’s often a good idea to choose cotton shirts, whether they’re t-shirts or sweatshirts. If people order preshrunk shirts, they won’t have to worry about the shirts getting shrunk when they’re washed later. Shirts like that can last for a comparatively long time.

As long as both sets of shirts have a similar design or the same colors, they’ll still recognizably be part of the same P.E. uniform. Some schools will order PE uniforms that use the school’s colors, as it’s a relatively easy way to make the P.E. uniforms seem more specific and customized.